Sustainability is Our Mission

For JP Graphics, sustainability started out as a differentiator and has evolved into a mission. When its president, Joan Escover, started the business in the late 1990s, she realized that she needed to find a way to stand out. “I couldn’t compete for a 10-cent piece of paper. I couldn’t compete running one shift. So I began to look at how I could do things differently,” she says. At the same time, the idea of corporate sustainability was beginning to take off. For Escover, who was already an avid recycler, the path forward was clear: take advantage of all the opportunities that sustainability offered to boost the bottom line and to build the brand.

Once Escover decided that sustainability would be her focal point, she began to take action. She started selling 40% post-consumer waste paper to justify higher prices. She took advantage of rebates for installing solar panels. And when the city of Santa Clara began its Green Business Program, Escover was one of the first to sign up. After taking these measures, she was able to embed sustainability into the company’s messaging. “Some of the best feedback we’ve gotten on our messaging is about our solar panels,” she says. “When people see that your whole roof has solar panels, it’s a big thing.” Solar panels are a no-brainer for Escover. Not only do they make use of unusable rooftop space, but they also resulted in a kickback for the company. Between tax rebates and the payment for sending power back to the city’s grid, installing solar panels was a critical source of cash flow in JP Graphics’ early days. The company was also able to generate cash flow through International Paper’s recycling program. One of the keys to JP Graphics’ success is Escover’s willingness to be an early adopter of eco-friendly program that translated into short- and long-term revenue. “You have to buy into some of these programs,” she says. “If you’re willing to spend more money on it, you’re going to reap the benefits more quickly.” 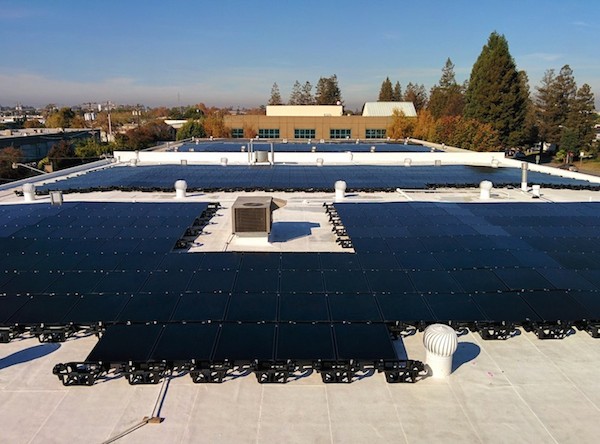 Escover says one way small businesses can reduce their environmental footprint is by putting pressure on their vendors. When she noticed that an equipment manufacturer’s inks and oils came in plastic containers, she asked about their recycling options. She was surprised to hear that they weren’t recyclable or refillable — until she made a big fuss about it: “I said, ‘No, you guys have to come up with a way for us to either refill them or recycle them.’ ” After Escover’s prodding, the vendor retracted their statement and said that the containers were in fact recyclable. “You’ve got to save the world one plastic thing at a time.”

Other printers can do the same. Before making a purchase, Escover advises fellow business owners to rethink how they evaluate their options. Considerations for sustainability are just as important as productivity and new features. “Instead of only asking how much ROI I can generate from a machine, I also ask about how much waste I’m generating from it.” Getting employees in on the actionSustainability is a part of the culture at JP Graphics. Everyone knows how important it is to Escover personally, but she’s also found ways to make it engaging for her employees. When she started the International Paper recycling program, she gave her team a mission. At the time they were cleaning their office themselves. She told them that if the program earned enough money, she’d use it to cover the costs of a cleaning company, and the plan worked. “We used it as a motivator for people to recycle everything here. And the team knows if they put something recyclable in the trash, I’ll go take it out of the garbage and say ‘Hey, we need to save the world!’ They laugh at me but it’s true.”

While economic downturns have slowed the momentum of sustainable efforts, Escover believes that people are finally bringing it back into focus. Escover uses the tagline “Everything is Better With Print” to represent the company’s dedication to shining light on the intangible yet priceless effect of printed materials, such as the special feeling of receiving a beautiful embossed print event invitation. And in order to capture the next generation of consumers, she thinks the industry needs to raise awareness of the sustainability and power of print, especially among young people. “This generation wants to see that you’re being globally aware. And we need to show them that paper and recyclability is the best way to do that.”

Designing for Metallic Inks with the Xerox® Iridesse